After releasing his weekly ‘Sanctified Sundays’ series on Soundcloud up and coming Harlem rapper follows it up with his debut mixtape “Sanctified” download it here Uno Sanctified.

“Sanctified to me, means being blessed and enlightened. It gives a sense of being “found” in a topic, as well as being more knowledgeable about it. I’ve been working on this mixtape for about a year now, initially putting out songs every Sunday as part of my “Sanctified Sunday” soundcloud series. Now it’s finally finished.

I chose this title as both a metaphorical and cocky way to say: I’m up next. Metaphorically, I’m saying this tape will serve as enlightenment for the listener. Confidently, I’m saying: this body of work will be somewhat like a sermon at Church. Something that could bring anyone who listens “closer to God”. I hope to do this for you.” 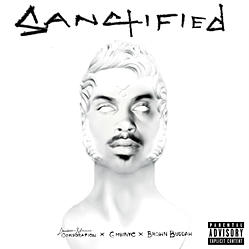 Recently a “mixtape” from legendary 90’s grunge band Nirvana’s front man Kurt Cobain surfaced on the internet. As it turns out this mix is not brand new to the web but has been on several Nirvana archives and message boards since 2002, disappearing and reappearing from site to site. This mix shows Cobain’s eclectic music taste and genius mind, fusing all sorts of weird sounds from a large array of songs and TV show snippets. This mix is like a Madlib Mind Fusion mix if Madlib was even more “out there”. Enjoy this pre-fame Kurt Cobain maniacal mix.

Kurt Cobain’s “Montage Of Heck” from SpaceEcho on Vimeo.

Myriad Muzik is a music community here to bring all genres and eras of music together. Quality art has no division or expiration date and we work constantly to connect fans and creators together who … END_OF_DOCUMENT_TOKEN_TO_BE_REPLACED