Texas-born artist, Willie Nelson, whose actual birthday was incorrectly recorded by doctor, celebrated his birthday twice today, and yesterday. The Abbott native celebrates his birthday twice a year due to the fact of being born on the heels of midnight on April 29, 1933. His birth date, however, was only registered at the courthouse on April 30. Nelson was singing in honky tonks by the time he was 13 years old thanks to his parents who bought him his first guitar at the age of six. He was already writing his own songs by the time he turned seven. The singer’s musical career took off after serving in the Air Force. Rolling Stone paid honour to Nelson’s birthday on their most recent cover labelled “The Weed Issue”. 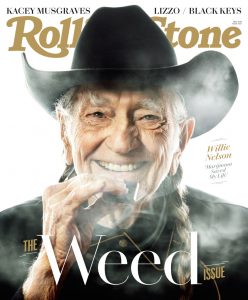 Pink Floyd started their sessions for their next album ‘Wish You Were Here’ today at Abbey Road Studios, London, 1975. This was their ninth album and was released on September 12th 1975. ‘Shine On You Crazy Diamond’, features on this album. The song served as a tribute to Syd Barret who left the band seven years earlier due to a mental breakdown. The album topped record charts in both the US and UK and EMI was unable to meet demand and print enough copies. It appeared on Rolling Stone’s list of ‘The 500 Greatest Albums of All Time’ even after initially receiving mixed reviews. Both David Gilmour and Richard Wright cited the album as their favourite Pink Floyd album.

Today, 47 years ago, the American songwriter, poet and frontman of The Doors, Jim Morrison, was found dead in a bathtub in Paris. It is said that the artist died of a heart attack. The artist co-wrote some of the band’s biggest hits, including ‘Love Me Two Times’ and ‘Love Her Madly’ During the 60’s, Morrison developed an alcohol dependency that, at times, affected his performances on stage. He died at the age of 27. 25 years after his death, more than 15 000 fans gathered at the Pere Lachaise Cemetery to pay their respects.

James Douglas Morrison was born in 1943 and will forever be remembered for his poetic lyrics, wild performances, unique vocals and dramatic events throughout his life and early death. Regarded by many as one of the most influential frontmen in rock history, his rebellious legend will live on reminding fans of his contribution to the generation gap and youth countercultures. Morrison was ranked 47th on the Rolling Stone’s list of “100 Greatest Singers Of All Time” and was inducted into the Rock And Roll Hall of Fame in 1993.

American country singer-songwriter, Margo Rae Price, based in Nashville, Tennessee, has been called “country’s next star” by The Fader. Her debut album, “Midwest Farmer’s Daughter” was released by Third Man Records on March 25, 2016. By many, she is described as a rare country music sensation.

Watch as the artist takes Rolling Stone on a backstage tour at the Governors Ball in New York. The free-spirited country singer-songwriter opens up about her music and smoking weed and provides an in-depth view on her “nothing-short-of-a-honky-tonk-barnburner” set while riling up her crowd during the performance.

Born in 1936, George “Buddy” Guy, is an American blues icon known for influencing renowned guitarists including Eric Clapton, Gary Clark Jr., Jimmy Page, Stevie Ray Vaughan, Keith Richards, Jeff Beck and John Mayer. He played as a house guitarist at Chess Records with Muddy Waters where he began his musical collaboration with the harmonica player, Junior Wells. The blues artist was ranked 30th on the Rolling Stone list of “100 Greatest Guitarists of All Time” and his song “Stone Crazy” was ranked 78th on their list of the “100 Greatest Guitar Songs of All Time”.

Described by Eric Clapton as  “the best guitar player alive”, Guy’s career took off during the early 1990’s blues revival where Clapton requested the artist to be part of the “24 Nights” all Star blues show at in The Royal Albert Hall.

Myriad Muzik is a music community here to bring all genres and eras of music together. Quality art has no division or expiration date and we work constantly to connect fans and creators together who … END_OF_DOCUMENT_TOKEN_TO_BE_REPLACED