Sly And The Family Stone

Texas guitarist, Gary Clark Jr., released his third studio album, ‘This Land’, last week. The artist has spent the last few years translating his mojo into studio statements and seemingly failed to capture the thrilling dynamics of his live shows in his previous albums — 2012’s ‘Blak and Blu’ and 2015’s ‘The Story of Sonny Boy Slim’. Clark Jr. finally conquered the pitfalls that held him back all these years. His latest album serves as evidence of the singer-guitarist embracing the possibilities of studio production rather than resisting the expressive challenges. His studio experimentation consists of eighties R&B, funk, rockabilly, punk, reggae-inspired bass synths, keyboards and samples to replace his extensive guitar solo’s that he is known for in his live shows. The 35-year-old has never had more to say thanks to his updated studio experimentation methods that led him to a flux of songwriting. “Exploitation wants me to be the same,” as he puts it. “I don’t want to.” In the album, Clark narrates stories of success, marriage and fatherhood and, for the first time, his longing for social justice. The artist stated that he was concerned about coming across as the stereotypical angry black man at first, but he realised that it was more important for him to be honest and authentic. Listeners will be confronted with traces of Clark’s earlier music influence such as Sly & the Family Stone, Curtis Mayfield, Luther Vandross, Whitney Houston and Stevie Wonder. He is currently on tour for the album and was quoted saying, “I’m singing like I never sang in my life before. I’m going to be exhausted after this but it’s time to put it all out there on the table.”

Organised by four young men, John Roberts, Joel Rosenman, Artie Kornfeld, and Mike Lang, the 1969 Woodstock Festival became an icon of the 60’s hippie counterculture. The oldest of the four at the time was only 27 years old. 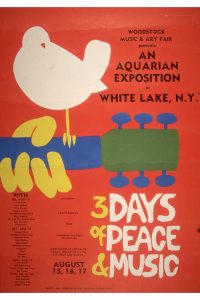 “This is a win for the good guys” Musical genius and funk legend Sly Stone has recently been awarded $5 million in back royalties and damages. Whenever the artists gets their just due in any business situation it is always a win for music, being as there wouldn’t be any music, or money to steal, without the artist. The industry seems littered with shady managers, lawyers and vultures who seem to only exist to look for opportunity to steal from and make profits off of art they had no part in creating, and as in most cases continue to make money after the art is created while the artist is still alive and not reaping the same benefits. Just read or recent review of George Clinton’s memoir to get a quick glimpse into the headache these vultures cause artists. But even if it is late, better late than never, congrats to Sly on this will deserved good fortune. Read the full story from CNN.com here:

“If you want him to stay, you’re going to have to pay Sly Stone.

That’s the $5 million message from jurors in California regarding the soul-funk music icon, known for classic Sly and the Family Stone hits such as “Everyday People, ” “If You Want Me to Stay,” “Dance to the Music” and “Family Affair.”

On Tuesday, a Los Angeles Superior Court civil jury found for Stone in his breach-of-contract lawsuit against Even St. Productions, manager Jerry Goldstein and attorney Glenn Stone, awarding him $5 million in royalties and damages.

“This is one for the good guys,” Los Angles trial lawyer Nicholas Hornberger said. “These people cheated him and took all his money.”

In his lawsuit, Stone (whose legal name is Sylvester Stewart) alleged that Goldstein and Glenn Stone “without the permission of Sly Stone, have received, borrowed, and continue to receive millions of dollars in royalties or derived from royalties,” according to the Los Angeles Times.

“They would give him a little money so he would sign stuff,” Hornberger said. “They had him sign all sorts of complicated contracts he would never understand, and he just wanted to make music. They just wanted his royalties.”

By 2011, Stone was reportedly homeless, living out of a van. He had sued Goldstein in 2010, accusing him of stealing his royalties.

“We are disappointed with the verdict, and we believe the jury didn’t understand” all of the evidence, Bodell said. “It’s plain to me from the jury award, evidence and other information I’ve received subsequently” that the jury miscalculated the verdict, he said.

It’s not clear how long it would take the singer to collect the entire jury award, given the other side’s plans to appeal.

However, Hornberger says the court has control of $2 million or $3 million in royalties paid out during the lawsuit because they were deposited with the court.

He said he expects the court to rule on future royalties and other matters within a month or two.”

It’s almost impossible to review the work of a musical genius. All they create is usually perfect for the most part. This album could allow for some missteps since the majority of the track listing is compiled of rough cuts, sketches, and unreleased alternate takes. Fortunately, and with all praise to Sly, this album only further cements the fact that Sly Stone is, and will always be a musical genius. When listening to material that was purposely not released to the public one would expect to hear something of lesser value but “I’m Just Like You” delivers top quality and then some. Comprised of material from the years 1969 and 1970 (right after Woodstock and right before the Family Stone would release their legendary ‘There’s A Riot Going On’ album) this album is a compilation tracks that were set to be released on Sly Stone’s short lived ‘Stone Flower’ label with distribution through Atlantic. After Woodstock Sly Stone was at the top of the world musically and as many do at this point he did a pretty abrupt 180, the future notoriously reclusive and elusive star locked himself in a studio with just a Maestro Rhythm King drum machine, the ‘Funk Box’ as the band would eventually come to call it, and his instruments and started what is perhaps the first collision of what is computer based equipment and live instrumentation. This amazing clash was something for listeners and it is not known if Sly used the drum machine just for sketches and demos only or truly intended to have finished songs come out with a locked in computer driven drum beat. ‘Riot’ a year later would come to utilize this technique but with this rare glimpse into Sly’s process we see early recordings of songs some with the ‘Funk Box’ keeping the beat and some with the full live band appearing a little bit later in the track listing. Most artist only want the listener to hear the final product but on this compilation their is a beautiful and more coherent version of “Just Like A Baby”  and version of “Somebody’s Watching You’ sung by the group Little Sister and some of Mr. Stone’s funkiest tracks yet are handed off to  San Fransisco soul singer Joe Hicks. With thumping basslines infused with rigid and precise drum programming underneath signature gospel organ riffs, all of course digitally remastered for the best sound, Sly Stone manages to drop another perfect album almost 50yrs after its conception. Even as just sketches and alternate takes this album is flawless and a much cherished piece of musical history. Another bonus to being a genius is that your work can be released half a century later and still be just as powerful.

Myriad Muzik is a music community here to bring all genres and eras of music together. Quality art has no division or expiration date and we work constantly to connect fans and creators together who … END_OF_DOCUMENT_TOKEN_TO_BE_REPLACED