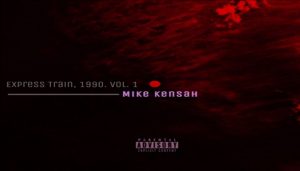 Recently we got to sit down with up and coming Hip-hop artist Mike Kensah and talk about a variety of things from influences, music’s purpose, heritage and more. Check out the full interview below

1. How did you get started in music?

Mike: Growing up I’ve always liked music and everything about it. Besides that my aunty (Georgia Agyei), ie my mother’s sister is an established gospel artist back in Ghana. My grandmother also used to be a singer, so i can say music has always been apart of me subconsciously or consciously.

2. At what point in your progress did you realize that you were good enough or could be good enough to do this?

Mike: I was about 15 years old when i first recorded a track in a professional studio.

Anybody that I played it for couldn’t believe it was actually me. They said i sounded like a pro already and i had confidence in my voice. Bottom line they liked my style. Since then I’ve always enjoyed the writing, recording & mixing process.

Mike: Doctor Kwame Nkrumah, a very respected Man/Leader who gained independence for Ghana, the first country to gain independence in the whole of Africa. So you can see how easy a kid will be influenced by such bravery and power. Especially Ghana being my origin of birth and motherland. Another great figure that influenced me is Dr. Martin Luther King, Malcom X and everybody else that influenced the world and changed lives.

4. You also cited Tupac, Big L, Nipsey Hussle, Akon, & Chris Brown as some of your musical influences, that’s a wide range of very different artists, what do you take from each of those guys specifically?

Mike: first of all i respect every Artist doing music on a major platform, every artist that has passion for his or her music thus consistency and a goal of changing lives through their lyrics and lifestyle.

What i take from Tupac: Bluntness, motivational messages in his music, standing up for something, his respect for women etc.

Chris Brown : His over all talent, it seems whatever he put his mind to, he does it. causes that guy sings, raps, dances, back flips, he shows you, you could do anything you put your mind to and be great at it. At least that’s how Chris influences me.

Nipsey Hussle: The whole independence thing. Owning your own, cutting out the middle man. Nipsey’s music speak to me in a lot of ways i relate.

Akon: We both share similar story for the fact that he’s an African like myself, and migrated with his family from Africa.  None of that stopped him from succeeding majorly in the American Music industry, that alone motivates me and gives me hope that i can make it too.

5. You’re Ghanaian, explain how your culture and background effects your music?

Mike: In Ghana my culture is an Ashanti Culture, if you do your research, the Ashanti Kingdom has been around since the 1600’s. we’re known for Gold being out major products. Prior to the Europeans invading us and trading Golds, slavery etc. with all that being said i think you can find that in my music.

6. What do you think music/art’s role is in the world and society and do you think it is fulfilling it’s purpose currently?

Mike: i think without music the world would’ve been a crazy and boring place. And yes its fulfilling its purpose people use music to escape from depression, problems, reality etc. like i said without it, i can’t imagine.

7. If you had to do one other art form besides music what would it be and why? And do you have any plans to ever implement this art form to your music if possible?

Mike: Drawing, i always to start with a blank mind, just like the blank page. I drawing what I imagine and i keep drawing as i keep imagining so to me i feel that freedom in creativity is everything and there’s no room for mistakes for that matter cause i create as i go. I very much implement every bit of it in my music since i like to go to the studio with a blank mind and start creating from scratch, i always like that challenge and freedom than to go in with a concept already, it keeps me limited to stick to the script or whatever.

8. In Hip-Hop we constantly hear about it’s lack of originality or diminishing quality..Do you believe there is such a thing as “bad” music?

Mike: I don’t believe that at all, i think people feel however they wanna feel about music. With that being said, we all cant feel the same way or like the same music. People relate differently so everybody is entitled to their opinion, me being an artist i don’t expect everybody to like my music.

9. If you had free reign to do what you wanted and complete creative control what would you do artistically? (if you could put on a certain stage show, film a documentary, perform at the super bowl etc..)

Mike: Put on a free stage show for everybody, poor, rich etc

10. Where do you see your career going and what goals do you hope to attain?

Mike: I see my career on a major level, i hear my name being mentioned amongst the greats that  ever did it dead or alive. I see myself being apart of hip-hop culture. I see my Albums in people’s favorite categories. I see my works changing lives of listeners that need it.

Mike Kensah drops a new single produced by Rush which deals with the current issues going on now in society. He states that this song is “Dedicated to All the black men that lost their lives due to police brutality.”

Myriad Muzik is a music community here to bring all genres and eras of music together. Quality art has no division or expiration date and we work constantly to connect fans and creators together who … END_OF_DOCUMENT_TOKEN_TO_BE_REPLACED